Earlier this year we had the privilege to be involved in the restoration of a large Victorian tiled hall at Stone Cross Manor in Ulverston which is being sympathetically redeveloped into nineteen apartments by Persimmon Homes at a reported cost of £4 million. The magnificent Grade II-listed stately home was built in 1874 for Myles Kennedy who was a Limestone Quarry owner and chairman of an Ironworks.

The property continued to be occupied by the Kennedy family until 1943 when it was requisitioned by the military who then sold it to Lancashire County Council in 1946. The council used it as a boarding school for some decades and allegedly had the central oak staircase removed so the hall could be used to play indoor football. Since that time, it has had different owners and states of disrepair until finally being acquired by Persimmon who contacted us to quote for restoring the floor to its former glory. This would be no easy task and would require plenty of help. However, we are a resourceful bunch and being part of a large network of Tile Doctors means we were able to draft in other Tile Doctors to assist. 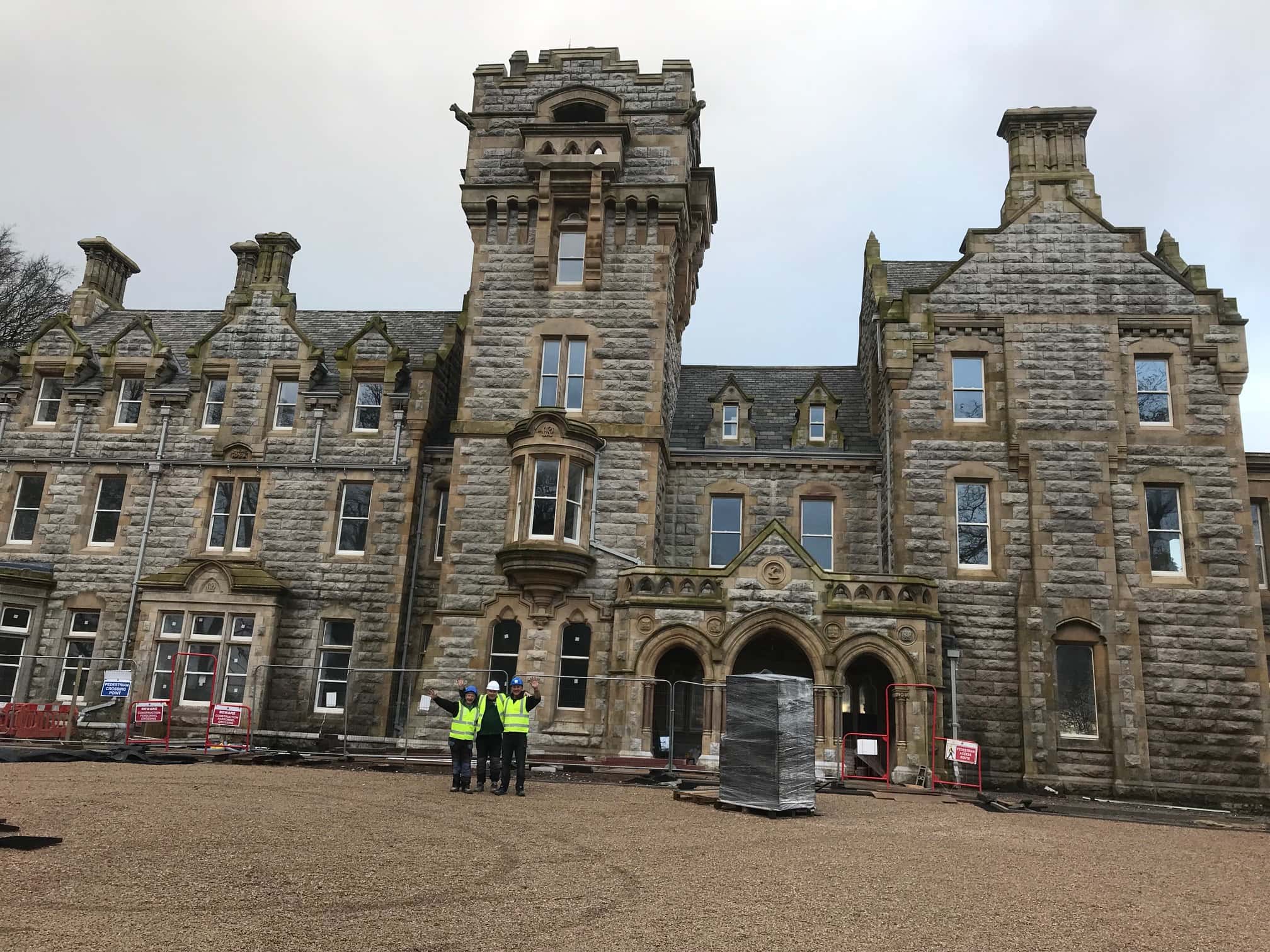 Before we took the job on, I went over to survey the floor and was immediately taken aback by the sheer size and scale of the project. The impressive Victorian hall has now had its large wooden staircase rebuilt and this sits in the centre of a series of architectural stone columns.

The floor was in a sorry state though and it certainly had a story to tell. At some point in its long history sections of the beautiful Victorian tiles had been cut out for the installation of central heating and then back filled with cement. There were also other areas that had been given the same treatment for some inexplicable reason. I suspect that the floor must have been covered in carpet during its later life to hide the mess.

The biggest problem was the realisation that with so many tiles missing the only way we could get exact duplicates would be to have them made by a company such as Craven and Dunhill. They are specialist tile manufacturer who date back to 1872 and can reproduce old tiles using the same tones and colours to match the originals. This was a high spec job, so this was the right approach however the price for the moulds and the time needed to manufacture threatened to push the cost of renovating the floor off the scale. 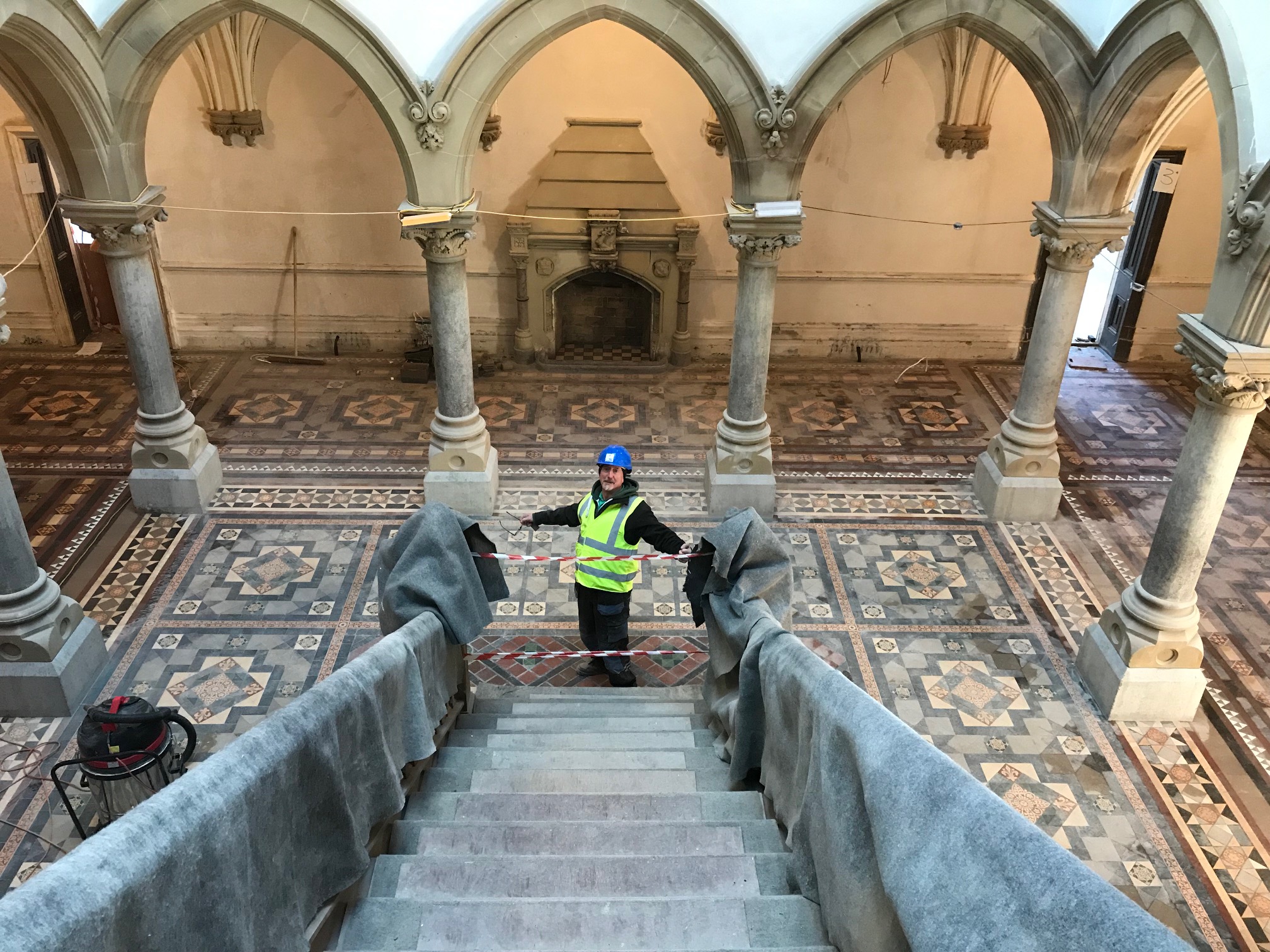 We discussed this with the developer and manged to come to a compromise by reusing tiles from another room in the property. Many of the tiles in that room had been damaged and were beyond restoration however there were enough tiles in good condition to fulfil our requirements in the main hall. They would have to be carefully lifted and cleaned but the tiles matched the colour and tone, size and texture to the main hallway perfectly. When you look at the before and after pictures on this page you will really struggle to see any difference and this is rare on old floor like this, the only exception being the black tiles underneath the radiators where a matching tone wasn’t available.

The first week was spent lifting and replacing broken tiles, it was a large floor area of about 120m2 which was set to be the main showpiece of the building, so it had to be right. As part of the floor prep it was also necessary to level parts of the floor with the application of a a self-levelling compound. We brought in Cardiff Tile Doctor Julian Iaconno to run this part of the job, he is an absolute master tiler and one of the best Victorian Tile installers in the country. At one point there was three of us working on the floor in order to keep to schedule.

The second week was spent cleaning the floor various Diamond burnishing pads, moving though increasingly finer girts until we achieved the desired finish. We also used a lot of Tile Doctor Grout Clean-up and Pro-clean to remove the old grout and dirt from the recycled tiles. As is always the case on a building site you get a lot of tradesmen who like to have a look at what we have done and walk all over our nice clean tiles, thus leaving dusty footprints everywhere. I must give credit to the Site Foreman for keeping these guys out although best intentioned they weren’t helping with the cleaning process, so all doors were locked off and access was limited to the site foreman and Tile Doctor only.

The third week was reserved for Sealing the tiles however this dragged on due to issues with the heating which was basically non-existent at the time and not an ideal situation in January. Persimmon went out of the way to chase up the plumbers who had been running behind and got this sorted for us, without heat we would struggle to get the sealer to dry.

We applied a Matt finish sealer called Colour Grow, which copes very well with potential damp issues that can cause problems with old floors with no damp proof course, it’s also excellent at bringing out the colour of Tiles whether Clay or Stone. Four coats of Colour Grow were applied to the Victorian tiles and being such a large floor area, it took a few days to fully seal the floor.

We cannot praise Persimmon enough for the dedication they have shown in the restoration of this historic property which has had a chequered past and will now have a long future.

Professional Restoration of a Victorian Tiled Hallway in Lancashire